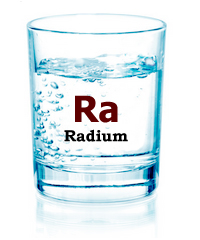 Radium is a radioactive element that occurs naturally in groundwater. All rocks contain small amounts of radium, and it can readily dissolve into water under acidic (low pH) conditions. Relatively high levels of radium can especially occur in deep aquifers where the water is very slow moving and stays in contact with the rock for a long time, but radium concentrations are usually low in shallow aquifers.

In addition to natural sources of radium, it may also be released from mining activities, industrial and medical waste, and accidental release from nuclear reactors.

“The health problems associated with radium are due to its radioactivity.”

The health problems associated with radium are due to its radioactivity. Radium occurs in groundwater mainly as the radioactive isotopes radium-226 and radium-228. When they decay, these isotopes emit alpha particles that can damage tissues in the human body.

Alpha radiation is blocked by the skin, so there is no danger from bathing or washing dishes in water containing radium. However, drinking water containing radium over a long period of time can lead to long-term health problems. These problems include increased risk of bone cancer. This occurs because radium is chemically similar to calcium and tends to accumulate in bones. When a radium atom finally decays, alpha radiation is emitted to tissues of the body (especially bones). Other problems associated with alpha radiation include anemia, cataracts, immune system problems, and increased risk of cancer.

For drinking water, the U.S. Environmental Protection Agency (USEPA) has set a maximum contaminant level (MCL) for radium of 5 picoCuries per liter (pCi/L, a measure of radioactivity), which is the maximum concentration of radium that is legally allowed in public drinking water systems under the Safe Drinking Water Act. Detection of radium in water requires chemical testing.

Interesting fact: When radium decays, one of the products is radon, a radioactive gas that is known for accumulating in basements.

Gross Alpha Particles test is a test that can be performed to measure overall radioactivity of the water. Gross Alpha detects these alpha particles. Commonly occurring radioactive particles detected by this test are radium (such as radium-226), radon, uranium (such as uranium-238), plutonium-236, polonium-210. Alpha particles are high-energy , but they rapidly lose energy. The gross alpha MCL is 30 µg/L.

How to Remove Radium

Radium can be removed from drinking water by one of several different methods, including reverse osmosis, distillation, ion exchange (water softening) and lime softening. There are also case studies that indicate that granulated activated carbon (GAC) media may remove the majority (70% or more) of radium from drinking water. Residential Whole House Carbon and Commercial GAC Systems are available and when appropriately sized , may be an inexpensive way of handling low levels of radium.

Reverse osmosis is a process by which water is forced through a membrane that allows water molecules to pass through but blocks larger ions, such as ones associated with iron and radium. In homes, small reverse osmosis systems (called point-of-use systems) are often located near the kitchen sink.

While reverse osmosis systems are cost-effective, entry level point-of-use systems are limited to producing only a few gallons of treated water each day. Significant recent improvements in membrane elements allow for higher end systems to produce 100 or more gallon per day. Keep in mind that the taste of the water may also be affected by the removal of the minerals.

Distillation systems work by removing most of the dissolved solids from the water by distillation. Small systems are available that can be placed on a kitchen counter, but they can only produce relatively small amounts of water per day. The cost of use of distillation systems is higher than for reverse osmosis systems because they use electricity to boil the water.

The type of ion exchange used in water softeners is also effective in removing radium. In this case, radium is replaced by sodium or hydrogen ions in the water using ion exchange resins. The resins need to be periodically regenerated with salt or dilute acid to maintain the effectiveness of the system. Water softeners that use salt will add sodium to the water, which may be a concern for people on low-sodium diets. We offer softeners of all sizes, for Residential applications, Commercial and Industrial Water Softeners based on water flow and levels of hardness and radium present in water.

Radium in Well Water How To Remove | FilterWater.com