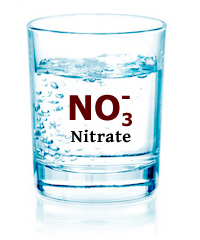 Nitrate is a naturally-occurring, inorganic form of nitrogen that is usually present in small concentrations in rainwater, stream water and groundwater. Nitrogen is an essential element for all livings things, and it is an important component of proteins and other building blocks of life.

“Nitrate contamination of groundwater is often associated with areas of intense farming.”

Want to know how to Remove Nitrates from Water? Read below

Because nitrogen is a major nutrient that is essential to plant growth, it is a principle component of fertilizers applied to gardens, lawns and crops. Spilling or excess application of fertilizers (inorganic or organic) can contribute to contamination of groundwater. The nitrogen in inorganic fertilizer may already be in the form of nitrate, or the nitrate may be a product of the decomposition of organic fertilizer, plants or animal wastes. Nitrate can move easily through soils, and it can migrate below the root zone and into groundwater, especially after heavy rainfall or excessive irrigation. Large amounts of nitrate can also be produced in association with animal feed lots and sewer systems.

Because of this, nitrate contamination of groundwater is often associated with areas of intense farming. Nitrate contamination can also occur in aquifers impacted by wastewater disposal sites, sewage or septic tank sludge disposal, landfills, livestock facilities, and golf courses. Nitrate from manure can enter soil from manure storage locations, barnyards and fields.

To protect groundwater from fertilizer or manure spills, the spills should be cleaned up immediately. Wells that have faulty or non-watertight casings may be vulnerable to contamination from surface waters containing nitrate. In the case of shallow aquifers that are contaminated with nitrate, it may be desirable to locate a new water supply in a deeper aquifer.

“Infants, pregnant and nursing women, and elderly people are susceptible to high levels of nitrate in drinking water”

The main health concern related to nitrate in groundwater is related to its conversion to nitrite (another inorganic form of nitrogen) in the digestive system. Nitrite interferes with the ability of red blood cells to carry oxygen, causing “blue baby syndrome” (methemoglobinemia). This is mainly a problem for infants, unborn children and the elderly, as well as nursing women who may pass nitrate to infants through breast milk. Baby formula mixed with high-nitrate water also exposes infants to nitrate. Infants, pregnant and nursing women, and elderly people are susceptible to high levels of nitrate in drinking water. Older children and adults with mature digestive systems do not tend to have this problem.

Nitrate is also associated with increased risk of gastric or bladder cancer, birth defects, and thyroid problems, although the extent of the risk is currently unknown. 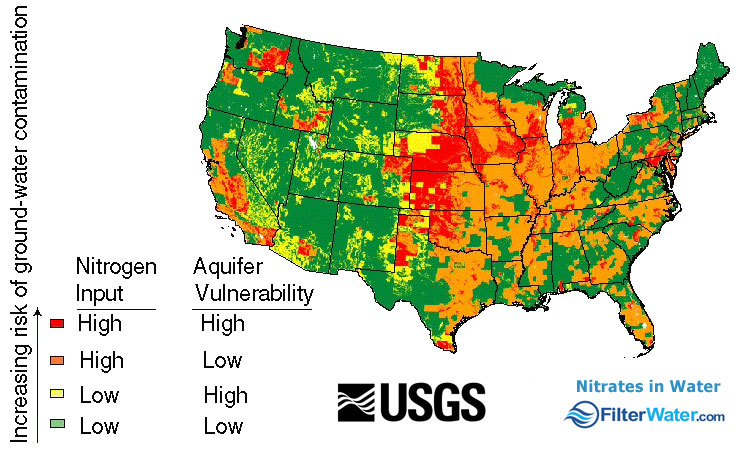 Map summarizing current data on the occurrence of Nitrates in Well Water in the United States.

The U.S. Environmental Protection Agency (USEPA) has set a maximum contaminant level (MCL) for nitrate (expressed as nitrate-nitrogen or N-NO3) of 10 milligrams per liter (mg/L or parts per million), which is the maximum concentration of nitrate that is legally allowed in public drinking water systems under the Safe Drinking Water Act. The long-term health risks associated with nitrate concentrations above the MCL are considered to be unacceptable, and infants, pregnant women, nursing mothers and elderly people should avoid drinking water above this limit. An alternative water source should be used for infant formula and food if the nitrate level is above the MCL.

Although nitrate levels in drinking water are usually low, the USEPA limit of 10 milligrams per liter may be exceeded in areas with intense agricultural activity. It is recommended that nitrate levels in groundwater be tested once a year to check for significantly increasing concentrations. If concentrations above 10 milligrams per liter are detected, this may indicate poor well construction and possible contamination from surface water, feedlots, sewage/septic systems or some other source. In this case, the water should also be tested for coliform bacteria, as well as pesticides that have been used in the area.

Interesting fact: Nitrate salts are the main ingredient of gunpowder and some other explosives.

How to Remove Nitrate from Drinking Water

Nitrate can be removed from drinking water by distillation, reverse osmosis or ion exchange. Boiling, carbon adsorption filters and standard water softeners do not remove nitrate.

Distillation systems work by removing dissolved solids from the water by distillation, and small versions can be placed on a kitchen counter. However, these systems can only produce relatively small amounts of water per day, and their cost of use is higher than for reverse osmosis systems because they use electricity to boil the water.

Reverse osmosis works by forcing the water through a membrane that allows water molecules to pass through but blocks larger ions, such as ones associated with iron, lead and nitrate. Reverse osmosis systems in a home setting are usually small systems (called point-of-use systems) located near the kitchen sink.

Reverse osmosis systems are cost-effective, and when invented they could only produce a few gallons of treated water each day. Significant recent improvements in membrane elements allow for systems that produce 100 or more gallon per day. The taste of the water may also be affected by the removal of minerals.

Nitrate-Selective Ion Exchange Filters work by removing nitrate ions by adsorbing them onto anion-exchange resins. These systems adsorb sulfate and nitrate ions from the water. Because these resins preferentially adsorb sulfate ions, their effectiveness at removing nitrate will be negatively impacted if sulfate concentrations are high. Care must be taken to replace or regenerate a filter before it becomes saturated. Otherwise, sulfate ions will replace nitrate ions already adsorbed to the filter, leading to an increase in the nitrate concentration of the water instead of a decrease. The removal of nitrate takes place in filter cartridges that may be part of point-of-use systems (near the kitchen sink) or point-of-entry systems that treat all water entering the house.

Nitrates in Well Water, How To Remove | FilterWater.com