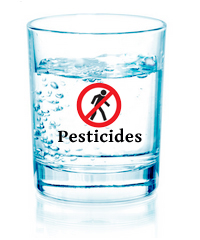 Pesticides can sometimes first appear in drinking water wells decades after the pesticides were applied or spilled, depending on the chemical properties of the pesticide and the geologic conditions.”

In a study published in 2006 by the U.S. Geological Survey, atrazine (a pesticide banned in the European Union but still widely used in the U.S.) was found 90% of the time in streams in agricultural areas and 70% of the time in streams in urban areas, and it was also frequently detected in groundwater [1]. Because groundwater can move very slowly, pesticides can sometimes first appear in drinking water wells decades after the pesticides were applied or spilled, depending on the chemical properties of the pesticide and the geologic conditions. Because of this, even pesticides that are no longer in use can still contaminate water supplies.

Interesting fact: The pesticide DDT is so persistent in the environment that it is still found in fish more than 40 years after it was banned in the U.S. in 1972.

There are many different pesticides, each with a different level of toxicity. The health risks associated with pesticides in drinking water are related to how toxic the compound is, how much is in the water, and how much exposure a human gets to the contaminated water. In large doses, which could come from direct exposure to pesticides, they can cause health problems such as cancer, organ damage, reproductive effects, birth defects, or nervous system damage. In drinking water, concentrations are usually low, but some pesticides are toxic even at very low levels.

“High levels of nitrate from chemical fertilizers in the water supply may indicate possible contamination by pesticides.”

Many pesticides are not regulated as contaminants in drinking water, but the U.S. Environmental Protection Agency (USEPA) has set maximum contaminant levels (MCLs) for several pesticides. A MCL is the maximum concentration of a contaminant that is legally allowed in public drinking water systems under the Safe Drinking Water Act. The long-term health risks associated with concentrations above the MCL are considered to be unacceptable. The MCLs for individual pesticides are based on their toxicity, with more toxic pesticides having lower MCLs. Their values range from 0.00005 to 4 milligrams per liter (mg/L or parts per million). For example, the MCL for atrazine, which is the most commonly detected pesticide in drinking water in the U.S., is 0.003 milligrams per liter.

High levels of nitrate from chemical fertilizers in the water supply may indicate possible contamination by pesticides. Because these tests are expensive and only test for specific compounds, it is best to only test for pesticides that you think may be contaminating your water.

How to Treat Drinking Water for Pesticides

Pesticides can be removed from drinking water by reverse osmosis or granulated activated carbon (GAC) filters. Reverse osmosis works by forcing the water through a membrane that allows water molecules to pass through but blocks larger ions or molecules, such as ones associated with iron, lead or pesticides. In homes, reverse osmosis systems are usually small systems (called point-of-use systems) located near the kitchen sink.

Reverse osmosis systems are cost-effective, but low end systems can only produce a few gallons of treated water each day. Significant recent improvements in membrane elements allow for more expensive systems to produce 100 or more gallon per day. The taste of the water may be affected by the removal of the minerals.

Granulated activated carbon (GAC) filters are relatively inexpensive and are simple to use. They remove pesticides and other contaminants that stick to small particles of material such as coal or charcoal. These filters can take the form of point-of-use systems or pitchers manually filled with water. GAC filters must be replaced or regenerated periodically to maintain their effectiveness. We have a number of different residential and commercial systems that can remove pesticides. We highly recommend you to have one even if your water comes from a municipality.

Pesticides in Drinking Water How To Remove | FilterWater.com