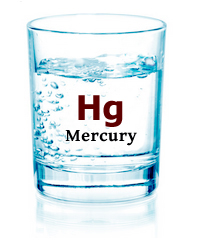 Mercury is a toxic metal that occurs naturally in rocks, sediments and soil. Higher than normal levels of mercury in the environment are also often associated with volcanic activity. Because mercury is naturally present in coal and oil, it is also released through the combustion of fossil fuels.

Mercury is used in many products, such as batteries, thermometers, and thermostats, and it has been used in a wide variety of industrial processes, especially in the chemical industry. Mercury can be released to the environment from industrial processes, agricultural processes, various products (household, commercial and medical) that contain mercury, sewage, and contaminated sediment. At industrial and hazardous waste sites, mercury that is spilled or improperly stored can also contaminate soil and groundwater.

“Higher than normal levels of mercury in the environment are also often associated with volcanic activity.”

The use of mercury increased during the industrial revolution in the 1900’s, but its use has decreased in recent decades because of health and environmental concerns. Mercury can be present in soil and groundwater where mercury-containing pesticides where used in agriculture. Mercury was used as a fungicide in indoor and outdoor paints in the U.S. until it was phased out in 1991. Outdoor paints that contain mercury can also contaminate soil and groundwater.

Organic mercury, also known as methyl mercury, is produced from inorganic mercury by certain types of bacteria. This form of mercury is known for its tendency to bioaccumulate in fish. The fish ingest the mercury, and it accumulates in the tissues of their bodies. As a result, concentrations of mercury in fish can be thousands of times higher than in the surrounding environment. This mercury can then accumulate in the bodies of humans who eat the fish, leading to health problems.

Both inorganic and organic forms of mercury are especially harmful to children, whose bodies more easily absorb mercury. Exposure to high levels of mercury can also damage the brain and developing fetuses. Mercury poisoning is often associated with irritability, tremors, and problems with vision, hearing or memory.

For drinking water, the U.S. Environmental Protection Agency (USEPA) has set a maximum contaminant level (MCL) and maximum contaminant level goal (MCLG) for mercury of 2 micrograms per liter (µg/L or parts per billion). The MCL is the maximum level permitted by law in municipal water supplies. The MCLG is the level of mercury in drinking water at which no adverse health risks are likely to occur, with an adequate margin of safety. Detection of mercury in water requires chemical testing.

“Levels of mercury above the MCL can occur where mercury-containing mineral deposits are present, where volcanic activity is present, or where soil or groundwater has been contaminated with mercury.”

Interesting fact: Millions of people in the U.S. have dental fillings that contain mercury.

How to Remove Mercury from Drinking Water

If mercury is present in your well water, you may need to drill a deeper well, tap into a different aquifer, or connect to a municipal water supply. Alternatively, you can treat the water to remove mercury. Mercury can be removed from drinking water by one of several different methods, including reverse osmosis, distillation, GAC filters, and lime softening.

Reverse Osmosis works by forcing the water through a membrane that blocks larger ions, such as ones associated with lead and mercury, but allows water molecules to pass through. In homes, small reverse osmosis systems (called point-of-use systems) are often located near the kitchen sink. Although reverse osmosis systems are cost-effective, they used to only produce a limited amount of treated water each day. Now, significant recent improvements in membrane elements allow for systems that produce 100 or more gallons per day.

Distillation systems work by removing most of the dissolved solids from the water by boiling and condensing the water. Small systems are available that can be placed on a kitchen counter, but they are limited to producing small amounts of water per day. The cost of use of distillation systems is higher than for reverse osmosis systems because of the electricity used to boil the water.

Granulated activated carbon (GAC) filters are inexpensive and simple to use. They can take the form of point-of-use systems or pitchers manually filled with water. Their effectiveness is sensitive to water pH, and they are most effective at near-neutral pH (pH near 7). These filters need to be replaced periodically to maintain their effectiveness over time.

We have numerous systems that are capable of removing mercury from water , including point-of-use, point of entry , office water coolers and more.

Mercury in Well Water How To Remove | FilterWater.com