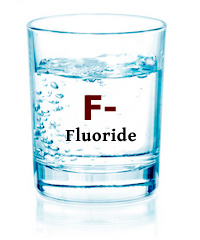 Fluoride is best known for its role in preventing cavities and tooth decay. Fluoride is often added to drinking water to promote dental health, but too much fluoride can lead to health problems.

Fluoride is a naturally-occurring ion in water. It occurs in small amounts in igneous and metamorphic rocks, as well as in all natural waters – even in rainwater. Although fluoride concentrations in river and lake water are usually very low, concentrations in well water may be much higher due to natural interactions with rocks and sediments. High concentrations of fluoride can occur in groundwater that has been in contact with rocks or sediments that are rich in fluoride-bearing minerals, especially when the water is low in calcium.

“Although fluoride is well known for its beneficial effects of dental health, it can also lead to dental problems.”

Fluoride was once considered to be an essential nutrient, but now it is only considered to be a beneficial element due to its positive impact on dental health. Fluoride helps prevent the development of cavities in teeth, especially in children. Drinking water that contains fluoride results in continuous bathing of teeth with fluoride- bearing saliva, causing the fluoride to become chemically incorporated into the surfaces of teeth.

Although fluoride is well known for its beneficial effects on dental health, it can also lead to dental problems. Too much fluoride can lead to dental fluorosis, which is a discoloration or mottling of the tooth enamel that can range from barely noticeable to severe.

In addition to dental fluorosis, opponents also cite other potential health risks. There is evidence that overexposure to fluoride in drinking water may contribute to thyroid problems, attention deficit hyperactivity disorder, and lower IQ. Additionally, accidental release of too much fluoride into drinking water in rare cases can lead to acute fluoride poisoning, with symptoms including nausea, vomiting and diarrhea.

Interesting fact: Fluoride is no longer added to drinking water in Japan and several European countries.

How to Remove Fluoride from Drinking Water

Fluoride can be removed from drinking water by reverse osmosis, distillation or by adsorption filters designed for fluoride removal. Reverse osmosis works by forcing the water through a membrane that allows water molecules to pass through but blocks larger ions, such as the fluoride anion and other minerals. In a home setting, small reverse osmosis systems (called point-of-use systems) are typically located near the kitchen sink. Reverse Osmosis Systems are cost-effective, but they only produce a few gallons of treated water each day. The taste of the water may also be affected by the removal of the minerals. We can install remineralizing cartridges on our RO systems.

Distillation systems work by removing most of the dissolved solids (including fluoride) from the water by distillation. Small versions are available that can be placed on a kitchen counter, but these systems are limited to producing relatively small amounts of water per day. Because these systems use electricity to boil the water, their cost of use is higher than for reverse osmosis systems.

Adsorption filters, such as our Fluoride Removing Water Filters, work by removing fluoride ions by adsorbing them onto mineral particles or resins. This may take place in filter cartridges that are part of point-of-use systems (near the kitchen sink) or point-of-entry systems that treat all water entering the house. To maintain good performance, these filters must be replaced on a regular basis. The performance of these systems can be affected by the presence of other minerals in the water.

Fluoride in Drinking Water How To Remove | FilterWater.com