Turbidity and Cloudiness of Drinking Water 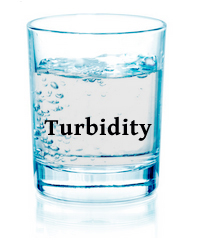 Cloudy or murky drinking water is unappealing, and for good reason. Many different types of materials can cause water to lose its clarity, such as clay, silt, organic matter, algae, plankton and other microorganisms, and dissolved organics. Although cloudiness is not itself a health concern, it could indicate problems with the water supply that may lead to health risks.

“In well water, high turbidity may be caused by an incorrectly sized well screen or a drop in the water table, causing fine particles from the aquifer to become mixed in with the water.”

High turbidity levels can be caused by a number of different reasons. River water often develops a muddy brown color after heavy rains because of eroded soil particles carried in the runoff. In well water, high turbidity may be caused by an incorrectly sized well screen or a drop in the water table, causing fine particles from the aquifer to become mixed in with the water. In new wells, turbidity may initially be high, but it will tend to clear up over time.

Not only is cloudy water ascetically unappealing, it can pose a health risk by providing food and shelter to microorganisms in the water. The suspended particles in the water can help protect pathogens from disinfectants in the water distribution system, and they can even promote their regrowth after the disinfectants are used up. Because it interferes with disinfection of drinking water, excessive turbidity levels have been associated with gastrointestinal illness. Removal of turbidity in drinking water has been shown to correlate with the removal of protozoa, and it should ideally be eliminated for effective disinfection of drinking water.

Interesting fact: High turbidity levels in lakes can cause thermal pollution because the suspended particles absorb heat from sunlight.

How to Treat Drinking Water for Turbidity

If a private well is used, treatment should start with making sure that the well screen is properly sized and in good condition. Not only can turbidity cause problems with water quality, but grit can also damage water pumps.

In a household, turbidity in water can be treated using sand filters and cartridge filters. A sand filter consists of a tank with fine sand on top of gravel. The sand effectively removes all but the finest suspended particles. These filters must be backwashed periodically to remove the accumulated sediment from the filter.

Cartridge filters are small enough to be used to treat water coming to a specific tap. They are effective at removing extremely fine particles, but they are designed to be replaced when they become clogged.

Turbidity and Cloudiness of Drinking Water How To Remove | FilterWater.com