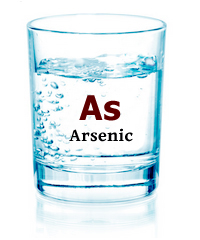 Most people have heard about the toxicity of arsenic. Arsenic was widely used for poisoning rats and other pests, and it was a popular “poison of choice” in mystery novels. Because of this, many people associate it with “poison”. Indeed, overexposure to arsenic is hazardous to your health.

Arsenic poisoning can cause a number of different ailments, including both acute and chronic (long-term) symptoms. Some of the long-term symptoms include increased risk of cancer (lung, bladder and skin), high blood pressure, heart disease, and discoloration and thickening of the skin, and there is evidence that overexposure to the chemical may lower the IQ of children.

The U.S. Environmental Protection Agency (USEPA) has set a maximum contaminant level (MCL) for arsenic of 10 micrograms per liter (µg/L or parts per billion). A MCL is the maximum concentration of a contaminant that is legally allowed in public drinking water systems under the Safe Drinking Water Act. The long-term health risks associated with concentrations above the MCL are considered to be unacceptable.

“Health risks associated with arsenic are lowest when there is no detectable arsenic in the water supply.”

Want to know how to remove arsenic from water? Read below

The USEPA set a maximum contaminant level goal (MCLG) for arsenic of zero, meaning that the target concentration for arsenic in drinking water supplies should be zero. Health risks associated with this dangerous element are lowest when there is no detectable arsenic in the water supply.

Although the use of arsenic in industry and agriculture is on the decline, arsenic contamination of drinking water can result from contact with soil affected by human activities. It has been used in wood preservatives, pesticides, metal alloys and semiconductors, as well as in animal feeds and medical treatments.

Because the chemical has been so widely used, arsenic-contamination is widespread in soil. Water infiltrating through contaminated ground can pick up arsenic and carry it into aquifers as it migrates deeper underground. Because of this, arsenic concentrations exceeding the USEPA’s MCL of 10 micrograms per liter are not uncommon in water supplies.

Interesting fact: A lead-arsenic compound was the most widely-used insecticide in orchards in the U.S. until 1947.

What most people don’t know is that arsenic is naturally-occurring in rocks, soils and sediments, and unsafe levels can exist in well water even without contamination due to human activities. A variety of geologic conditions can cause high concentrations of arsenic in well water, such as:

“In the case of arsenic, ‘natural’ does not mean ‘good for you’.”

However, in the case of arsenic, “natural” does not mean “good for you”. On the contrary, arsenic concentrations above the MCL and originating from natural sources are a common problem in the U.S. and in many areas of the world. For example, a recent study by the U.S. Geological Survey reported that more than 10 percent of wells in a certain geologic province of New England have arsenic concentrations exceeding the MCL [1]. 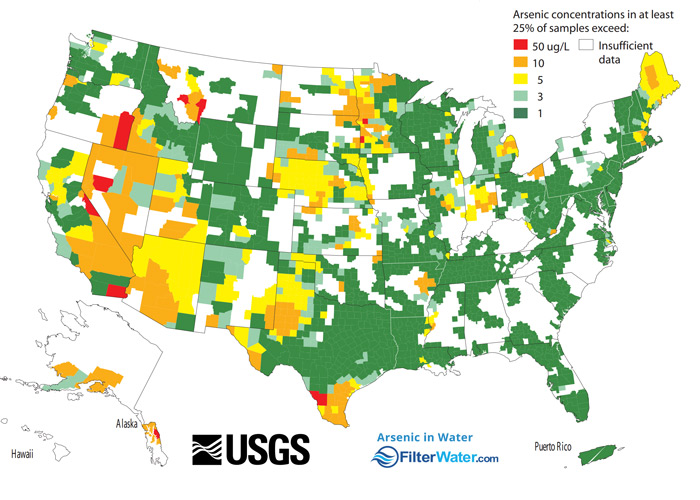 Click map to enlarge
Map summarizing current data on the occurrence of arsenic in well water in the United States.

Arsenic in water is odorless and tasteless, so detection requires chemical testing. Concerned well owners should have their water tested by a certified drinking water laboratory. If unsafe levels are in your well water, then you have a number of possible options:

How to Remove Arsenic From Water

Arsenic can be removed from drinking water by reverse osmosis or by adsorption filters designed for arsenic removal. Reverse osmosis works by forcing the water through a membrane that allows water molecules to pass through but blocks larger ions, such as ones associated with iron, lead and arsenic. In a home setting, reverse osmosis systems are usually small systems (called point-of-use systems) located near the kitchen sink.

Reverse osmosis systems are cost-effective, but they can only produce a few gallons of treated water each day. Depending on the chemistry of the water, a reverse osmosis system may also require pretreatment to remove iron or manganese or to oxidize the arsenic (if a reduced form of arsenic - As(III) - is present in the water). Furthermore, the taste of the water will be affected by the removal of the minerals.

Adsorption filters work by removing arsenic molecules by adsorbing them onto mineral particles or resins. This takes place in filter cartridges that may be part of point-of-use systems (near the kitchen sink) or point-of-entry systems that treat all water entering the house. These filters must be replaced on a regular basis, and their performance can be affected by the presence of other minerals in the water. Adsorption filters may be used in combination with reverse osmosis systems for enhanced effectiveness.

Arsenic in Well Water How To Remove | FilterWater.com