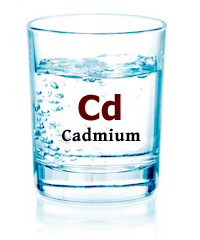 Cadmium is a toxic metal that occurs naturally in metal ores, petroleum and coal, and it is often released in association with volcanic activity. When these types of natural occurrences come into contact with acidic water that is low in dissolved solids, significant cadmium concentrations can be reached in groundwater.

Cadmium is used in many products, including metal plating, batteries, electric components, and pigments. Contamination of soil and groundwater by cadmium is often associated with industrial activities that involve cadmium, as well as leaching of landfills.

Cadmium can also contaminate drinking water through corrosion of galvanized pipes and cadmium-containing solders. Cadmium contamination from pipes and fittings can be more of a problem when the water is acidic and low in dissolved solids.

For drinking water, the U.S. Environmental Protection Agency (USEPA) has set a maximum contaminant level (MCL) and maximum contaminant level goal (MCLG) for cadmium of 0.005 milligrams per liter (mg/L or parts per million) in municipal water supplies. The MCLG is the level of cadmium in drinking water at which no adverse health risks are likely to occur, with an adequate margin of safety. Detection of cadmium in water requires chemical testing.

Interesting fact: Although cadmium is toxic to humans, it is an important nutrient for some microscopic marine organisms.

How to Remove Cadmium

Cadmium can be removed from drinking water by one of several different methods, including acid cation resin, reverse osmosis, distillation, and lime softening. Reverse osmosis works by forcing the water through a membrane that allows water molecules to pass through but blocks larger ions, such as ones associated with iron and cadmium. In homes, small reverse osmosis systems (called point-of-use systems) are usually located near the kitchen sink.

Although reverse osmosis systems are cost-effective, older systems could only produce a limited amount of treated water each day. Now, significant recent improvements in membrane elements allow for systems that produce 100 or more gallon per day. The taste of the water may also be affected by the removal of the minerals.

Distillation systems work by removing most of the dissolved solids from the water by distillation. Small systems are available that can be placed on a kitchen counter, but these systems are limited to producing relatively small amounts of water per day. Also, their cost of use is higher than for reverse osmosis systems because they use electricity to boil the water.

Ion exchange filters work by removing cadmium ions by adsorbing them onto mineral particles or resins. This takes place in filter cartridges that may be part of point-of-use systems (near the kitchen sink) or point-of-entry systems that treat all water entering the house. The filters in filtration systems need to be replaced periodically to maintain their effectiveness over time.

Cadmium in Well Water How To Remove | FilterWater.com