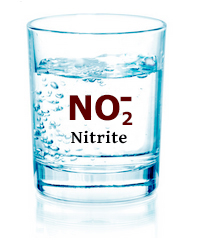 The element nitrogen is essential to all livings things, and it is necessary for producing important biomolecules such as proteins and other building blocks of life. However, too much nitrogen in water can result in a variety of water quality problems, including human health risks.

Nitrite is a form of nitrogen that occurs naturally in the environment, and it can be converted by bacteria to and from other common forms such as ammonium and nitrate. Because these forms of nitrogen serve as important nutrients for plants, they are commonly used in chemical fertilizers.

Nitrite can contaminate water through runoff water in contact with fertilizer or sewage, or from groundwater in contact with mineral deposits. Nitrite and other nutrients can lead to environmental problems such as eutrophication (algal blooms in lakes and ponds) and hypoxia (the depletion of oxygen in water due to excess algae growth). Cyanobacteria blooms associated with eutrophication can also produce toxic compounds harmful to livestock and human health.

“Nitrite can be produced by Nitrosomonas bacteria in water distribution pipes.”

Additional sources of nitrite to water include leaching of fertilizers or manure, improperly treated sewage or septic tank effluent, or decaying plant or animal matter. Shallow wells and improperly constructed or damaged wells are the most susceptible to nitrite contamination.

Nitrite can be produced by Nitrosomonas bacteria in water distribution pipes. This can occur in galvanized steel pipes if water contains nitrate and is low in oxygen or if chloramines are used to provide disinfection. This process is called nitrification (the conversion of ammonium to nitrite to nitrate). Other types of nitrifying bacteria include Nitrosococcus and Nitrospira.

“Infants, pregnant and nursing women, and elderly people should avoid consuming water with high levels of nitrite or nitrate.”

Nitrite causes “blue baby syndrome” (methemoglobinemia) by interfering with the ability of red blood cells to carry oxygen. This is mainly a problem for infants, unborn children and the elderly. Baby formula mixed with water high in nitrite or nitrate can also lead to this problem. Infants, pregnant and nursing women, and elderly people should avoid consuming water with high levels of nitrite or nitrate. This is not usually a problem for older children and adults with mature digestive systems.

The U.S. Environmental Protection Agency (USEPA) has set a maximum contaminant level (MCL) for nitrite (expressed as nitrite-nitrogen or N-NO2) of 1.0 milligrams per liter (mg/L or parts per million). This is the maximum concentration of nitrite that is legally allowed in public drinking water systems under the Safe Drinking Water Act. The long-term health risks associated with nitrite concentrations above the MCL are considered to be unacceptable. Alternative water sources should be used for infant formula and food if the nitrite level is above the MCL.

Water with nitrite concentrations above the MCL should not be used for drinking or cooking, but it can be used for bathing, washing and laundry.

Interesting fact: Nitrite is often used in meat curing and as a food preservative because it inhibits the growth of bacteria.

How to Remove Nitrite from Drinking Water

Nitrite can be removed from drinking water by reverse osmosis, distillation or ion exchange. Boiling, carbon adsorption filters and standard water softeners do not remove nitrite.

Reverse osmosis removes nitrite and other dissolved solids by forcing the water through a membrane that allows water molecules to pass through but blocks larger ions, such as ones associated with iron, lead and nitrite. In a home setting, reverse osmosis systems are usually small enough to be located near the kitchen sink (these are called point-of-use systems). Reverse osmosis systems are cost-effective, but small systems for home use can produce only a few gallons of treated water each day.

Distillation systems remove dissolved solids from water by evaporating it and collecting the condensation, and small versions are made that can be placed on a kitchen counter. These systems can only produce relatively small amounts of water per day. Compared with reverse osmosis systems, distillation systems are more expensive to use because they use electricity to boil the water.

Ion exchange filters remove nitrite and other anions by adsorbing them onto anion-exchange resins. This takes place in filter cartridges that may be part of small point-of-use systems near the kitchen sink or larger point-of-entry systems that treat all water entering the house. These systems adsorb sulfate, nitrate and nitrite ions from the water.

Because anion exchange resins preferentially adsorb sulfate ions, they will be less effective at removing nitrite if sulfate concentrations are high. Care must be taken to replace or regenerate this type of filter before it becomes saturated. Otherwise, sulfate ions will replace nitrite ions already adsorbed to the filter, causing nitrite concentrations in the water to increase instead of decrease.

Nitrite in Drinking Water, How To Remove | FilterWater.com