The Effects of Water Pollution

Related TopicsImportant Topics
One afternoon in 1991, my next door neighbor and I packed up our five children for an afternoon at the lake – and embarked on a nightmare that lasted nearly a month and brought the effects of water pollution uncomfortably close to home. The seven of us spent a relaxing, active day at the beach, swimming and sunning. My eight year old daughter and five year old son barely surfaced from the water for the entire day, and even my six month old daughter got her share of being bounced and dunked in the cool, refreshing lake. My neighbor's eight and ten year old sons were no different, and as the sun went down, we all headed back home, content and refreshed.

Six days later, my neighbor and I took another trip together, this one to the emergency room of the local hospital. Both her eight year old and my five year old son were suffering from dehydration brought on by violent, alternating bouts of diarrhea and vomiting. Within an hour, both boys were hooked up to IV’s for re-hydration therapy, and the two of us were being grilled by a nurse from the health department about our activities over the last several days. Over the next two weeks, we were kept busy caring for one after another of our children, taking stool samples, giving antibiotics and cleaning up after violently ill children – and ourselves. At the height of it, I spent a terrifying night at my oldest daughter’s bedside, counting the beats of her pulse against her throat as her mother filled out the necessary paperwork to admit her to the hospital.

What we didn’t know on that sunny afternoon at the lake was that a thunderstorm the night before had triggered an overflow of our city’s old sewer system, washing untreated waste into the water of the nearby reservoir, and from there into the lake where we were swimming. The culprit was giardia lamblia, a parasite that is found in the stool of humans and animals. Over the past 20 years, it has become recognized as the most common cause of waterborne diseases in the United States. Giardia is so common, in fact, that you’ll find links to information on giardiasis on the Environmental Protection Agency’s web site about water quality. 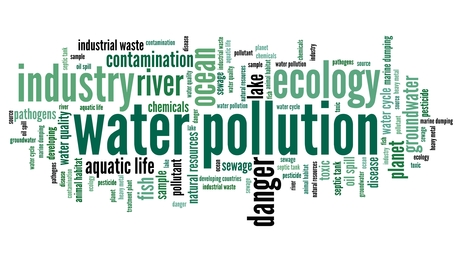 Giardia lamblia is only one of many bacteria and viruses that pollute our water. Others include shigella, which causes dysentery; clostridium perfringens, which causes enteritis; salmonella typhi, poliovirus and hepatitis A.

The effects of water pollution became a very personal thing for me – but water pollution has global effects that are far harder to cure than a giardiasis infection. When we hear water pollution, we tend to think of oil tankers and petroleum, of toxic chemicals pouring into rivers and lakes from factories, of garbage scows dumping mountains of waste at sea. Those are all obvious sources of water pollution with harmful effects – but many threats to the water supply are far less obvious, almost innocuous.

When rain and irrigation water runs off cultivated land that has been fertilized and treated with pesticides, it carries with it the excess nitrogen and poisons – right into the water supply. Pesticides are poisonous, but the fertilizers pollute the water in a different way. By encouraging the growth of aquatic plants, they bring about the de-oxygenation of water, eventually killing off plant and animal life in the stream, lake or river into which they flow.

At the same time, the fertilizer encourages the growth of bacteria that occurs naturally in water, raising the concentration of bacteria to unacceptable levels.

The Effects of Thermal Water Pollution

Many factories cool their machinery with water drawn from lakes and rivers. The heat dissipates in the water – which carries it away and is returned to the river – still hot. The heated water reduces the ability of the aquatic system to hold oxygen, and encourages the growth of warm water species. It can entirely change the ecosystem of an aquatic environment.

Water sources that are near factories and manufacturing plants may be contaminated with heavy metals like mercury, lead, cadmium, iron, magnesium and aluminum. If the metals attach to the sediment, they may find their way into the food chain via plants and aquatic animals. The end result is heavy metal poisoning if the concentration in the water is high enough.


Based on a true story, written for FilterWater.com by staff writer.
Last Updated: May 16th, 2013.

The Effects of Water Pollution | FilterWater.com