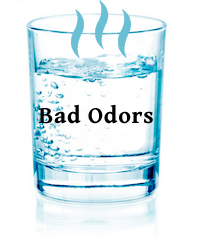 People are naturally uneasy about drinking water that has a strange smell. This is a good thing, because strange smells can indicate problems with the water supply, some of which could lead to serious health effects. However, there are many different possible causes for odor, and the cause of the odor can be difficult to determine.

In well water, odors can come from contamination from surface runoff, sewage or septic systems, or leaky underground storage tanks. Odors in well water can also be caused by bacteria growing in the well. In this case, you can shock chlorinate the well and then pump until the odor disappears. Odor in well water may also indicate contamination from an improperly located septic tank. This may be fixed by relocating the septic tank, drilling a new well, or tapping a different aquifer using the existing well.

If the odor only occurs in hot water, the source of the odor may be the hot water heater. Odors can originate in hot water heaters if they are unused for too long or if the temperature is set too low, which allows bacteria to grow. This problem can often be fixed by flushing water through the tank. If the tank has not been recently unused and the temperature has not been set too low, the magnesium rod in the hot water tank may be the cause of the odor. This can be fixed by replacing the rod.

Identifying the Source of Other Odors

The sources of some other odors may be interpreted according to their smell.

“A turpentine-like odor may indicate contamination with MTBE (methyl tertiary butyl ether), a common gasoline additive that is notorious for its ability to move quickly through groundwater and contaminate aquifers.”

Bleach, medicinal or chemical smells can be caused by chlorine in the water supply. These smells should go away after the water stands for several minutes. Sometimes, extra chlorine is added to a water supply for a short time if extra disinfection is needed. This is known as shock chlorination, which usually produces a strong bleach odor, but it should go away after the water runs for several minutes.

Musty, moldy, earthy, grassy or fishy smells may indicate bacteria growth in the drain or contamination of the well with surface runoff. Bacteria growth in a sink drain is the most common cause of these types of odors. In the home plumbing system, bacteria growing in a reservoir or pressure tank can also cause these odors. Cleaning and maintenance of the tank can often fix this problem. Growth of algae, fungi or bacteria in the water supply can also produce these odors. If the amount of chlorine in a municipal water supply is insufficient, then bacteria may be able to grow in the water pipes, which can cause these types of odors.

Fuel-like or solvent-like odors (petroleum, gasoline, turpentine, etc.) may indicate contamination from a leaky underground storage tank or pollution from factories, landfills, or agricultural runoff. A turpentine-like odor may indicate contamination with MTBE (methyl tertiary butyl ether), a common gasoline additive that is notorious for its ability to move quickly through groundwater and contaminate aquifers. Contamination with these types of odors may lead to serious health effects, so an investigation of the nature of the contamination is advised. Water with this type of odor should not be used until either the source has been taken care of or the water has been adequately treated. If the cause of the problem cannot be eliminated, then the water can be treated using activated carbon filtration.

Detergent odor (sometimes accompanied by foaming water) is usually associated with contamination from a septic system. In this case, the source of contamination should be eliminated, and the well should be treated with shock chlorination.

Sharp chemical odors may indicate contamination by pesticides or other chemicals.

Cucumber-like odors are often associated with iron-loving bacteria. These bacteria often appear as an orange slime in toilet tanks, which can also produce a sewage-like smell. Other microbes such as protozoa can also produce a cucumber smell in water.

“Rotten egg” (sulfurous), sewage-like or decayed odors are usually caused by bacterial activity. This may occur in a sink drain, water pipes, or the water supply.

Is the Smell Real or My Imagination?

Everyone has a different sense of smell, so water may smell differently to different people, and people also differ in their ability to sense smells. If only one person senses a smell, this may be because of a health problem with that individual rather than a problem with the water. However, it is still a good idea to check out potential water quality problems associated with smells, even if only one person notices it.

Granulated activated carbon (GAC) filters are simple to use and inexpensive. These filters remove contaminants that stick to small particles of material such as coal or charcoal. They can take the form of point-of-use systems (such as at a kitchen sink) or pitchers manually filled with water. GAC filters should be replaced or regenerated periodically so that they remain effective.

A chlorination system oxidizes substances that can cause odors, in addition to chemically killing microorganisms. This type of system adds chlorine (in liquid or solid form) to the water through a continuous feed system. Because sediment in the water could interfere with the chlorination, a filter should be placed before the chlorine injector. Chlorine is consumed as it reacts with impurities in the water (such as iron, microbes or organic matter). To ensure adequate disinfection and neutralization of odors, enough chlorine needs to be added so that there is a small amount left over after it is consumed. However, this residual chlorine can cause a noticeable chlorine taste in the water, so it may be desirable to remove it before drinking.

Chlorination also requires a certain amount of contact time in the water for it to kill microorganisms and neutralize odors (usually 30 minutes). This is why water is usually stored in a large holding tank or run through a series of coiled pipes after being chlorinated. Chlorine systems must be maintained to make sure that they function properly, and the chlorine supply must be periodically replenished.

Ozonation is similar to chlorination in that ozone is injected into the water, neutralizing odors and killing microorganisms. Ozone is produced using electricity and then injected into the water. Ozonation systems are more expensive than chlorination systems, but they can treat water for multiple contaminants, such as viruses, bacteria, iron and manganese, in addition to odors.

"Rotten egg" smell, which can also be sulfur or hydrogen sulfide in well water, can be treated by an oxidation-reduction medias such the one used in our iron and hydrogen sulfide removal systems.