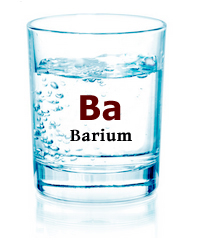 As a trace mineral in igneous and sedimentary rocks, barium in drinking water comes primarily from natural sources. Dissolved barium in water occurs in the form of soluble barium compounds (compounds that dissolve well in water) such as barium nitrate and barium chloride, whereas many other barium compounds are insoluble and do not contribute barium to drinking water. The solubility of barium compounds increases under low-pH conditions, meaning that higher concentrations of dissolved barium are possible in acidic water. Because of this, high concentrations of barium in drinking water are usually associated with low-pH water in contact with igneous rocks and manganese-rich sedimentary rocks.

In addition to natural sources, barium contamination of soil and groundwater may be related to barium ore mining, smelting of copper, natural gas and oil drilling, and manufacturing.

“High concentrations of barium in drinking water are usually associated with low-pH water in contact with igneous rocks and manganese-rich sedimentary rocks.”

Want to know how to remove barium from water? Read below

Exposure to soluble barium compounds in drinking water can lead to a number of different health problems. Long-term health problems include chronic hypertension (high blood pressure), and short-term effects can include difficulty with breathing, gastrointestinal problems, muscle weakness, changes in heart rhythm, and damage to the liver and other organs.

For drinking water, the U.S. Environmental Protection Agency (USEPA) has set a maximum contaminant level (MCL) and maximum contaminant level goal (MCLG) for barium of 2 milligrams per liter (mg/L or parts per million) in municipal water supplies. The MCLG is the level of barium in drinking water at which no adverse health risks are likely to occur, with an adequate margin of safety. Detection of barium in water requires chemical testing.

Interesting fact: Insoluble barium compounds, such as barium sulfate, are used to coat the inside of the esophagus, stomach and intestines to enhance the performance of medical CT scans.

How to Remove Barium

Barium can be removed from drinking water by one of several different methods, including reverse osmosis (RO), distillation, ion exchange filtering, lime softening and electrodialysis. Reverse osmosis works by forcing the water through a membrane that allows water molecules to pass through but blocks larger ions, such as ones associated with iron and barium. In a home setting, reverse osmosis systems are usually small systems (called point-of-use systems) located near the kitchen sink.

Reverse osmosis systems are cost-effective, but they can only produce a few gallons of treated water each day. Furthermore, the taste of the water will be affected by the removal of the minerals. We have residential RO systems available that produce up to 100 gallons per day and will put minerals back to improve water quality. For commercial and industrial customers, look at our list of Commercial Reverse Osmosis Systems.

Distillation systems work by removing the dissolved solids from the water by distillation, and small versions are available that can be placed on a kitchen counter. However, these systems are limited to producing relatively small amounts of water per day. Also, because they use electricity to boil the water, their cost of use is higher than for reverse osmosis systems.

Ion exchange filters work by removing barium molecules by adsorbing them onto mineral particles or resins. This takes place in filter cartridges that may be part of point-of-use systems (near the kitchen sink) or point-of-entry systems that treat all water entering the house. These filters must be replaced on a regular basis, and their performance can be affected by the presence of other minerals in the water. The filters in filtration systems need to be replaced periodically to maintain their effectiveness over time.

Electrodialysis involves forcing dissolved ions to cross an ion-selective membrane using an electrical current. The unwanted ions are then concentrated on the other side of the membrane. Pretreatment of the water (such as coagulation of small particles, oxidation of iron, and filtering) is usually required for efficient operation.

Barium in Well Water, How to Remove | FilterWater.com