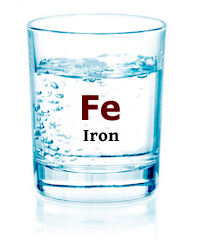 Iron is a very common element that makes up 5% of the earth’s crust. This element is very well known for contributing yellow, red and brown color to rocks, soil, and pigments, and it even contributes the red color to blood cells. Iron usually enters water through the dissolving of minerals in rocks and sediments, and it can cause problems such as unappealing color, staining and unpleasant taste.

“Ferrous can contribute an unpleasant metallic taste to water and food.”

There are two main forms of iron in water: ferrous iron and ferric iron. Ferrous iron dissolves in water, and it will not precipitate as a solid unless it is oxidized. The oxidized form of iron is ferric iron, which precipitates as a yellow, brown or red solid. These solid particles containing ferric iron tend to become suspended in water, giving it color.

Concentrations of iron as low as 0.3 milligrams per liter (mg/L or ppm) can lead to deposits of difficult-to-remove of stains on sinks, plumbing fixtures, tableware and laundry.

Certain types of bacteria can coexist with iron to form smelly biofilms. For example, you may have noticed a yellow or reddish-brown slimy film coating the inside of your toilet tank. These films can cause smelly odors and potentially clog plumbing.

Deposits of iron, whether from precipitation of iron-bearing minerals or deposition of iron biofilms, can restrict the flow of water in pipes and reduce water pressure. Inside water heaters, deposits of iron on the heating elements can reduce their effectiveness and increase energy costs.

“In a household or water distribution system, iron can also enter water from the corrosion of iron or steel pipes”

Iron can also occur in water as organic iron, where iron has been bound to organic molecules such as tannins. This may contribute a yellow or brown color to the water

In a household or water distribution system, iron can also enter water from the corrosion of iron or steel pipes when the pH of the water is below 6.

Iron is important to human health as an essential nutrient. Estimates of the minimum daily requirement of iron range from 10 to 50 milligrams per day.

Although large doses of iron can be lethal, iron associated with drinking water is not usually associated with health risks. A special health condition, known as hemochromatosis, is responsible for most of the health problems associated with iron. Hemochromatosis is a genetic disease that causes too much iron to be absorbed by the intestines, which in turn cause iron to accumulate in the body.

Because iron in drinking water does not pose a health risk to most people, no health-based guidelines for iron in drinking water have been proposed by the U.S. Environmental Protection Agency (USEPA) or the World Health Organization. Instead, the USEPA has set a secondary maximum contaminant level (SMCL) for iron of 0.3 milligrams per liter (mg/L or parts per million), which is the concentration of iron at which problems with water color or staining start to appear. Water with iron concentrations below the SMCL should not require treatment.

Interesting fact: The planet Mars was named for the Roman god of war because of its red color, which is contributed by ferric iron in the Martian soil. The red color of the planet reminded ancient people of blood, which also gets its red color from ferric iron.

How to Remove Iron from Drinking Water

The treatment of water for iron depends on the source and type of iron. If corrosion is the source of iron, raising the pH of the water may be a simple option. Another option that may be used in other cases is finding a different water supply, such as drilling your well to a different depth. Otherwise, water treatment systems may be used, depending on the type of iron.

Dissolved ferrous iron. This water is clear as it comes out of the tap, then it forms reddish-brown precipitates as the water is exposed to oxygen. There are a number of different treatments for dissolved ferrous iron, including aeration/filtration, water softening, chemical oxidation, oxidizing filters, catalytic filtration, and phosphate treatment.

Solid ferric iron. The iron-containing suspended solids in this water may give the water a red or yellow color. Treatment methods for ferric iron include oxidizing filters (such as manganese greensand) and chemical oxidation (such as chlorination/filtration).

Organic iron. The yellow or brown color contributed by organic iron can be treated using activated carbon filters followed by oxidizing filters (such as manganese greensand).

In an aeration/filtration system, air is mixed in the water to oxygenate it, and then the air is separated back out. A filter then removes the iron-bearing solids that precipitate from the water.

Water softeners work by removing ferrous iron ions and replacing them with sodium. This may not work if the iron concentrations are too high, and not all water softeners can remove iron.

Chemical oxidation systems work similarly to aeration systems, except that some other chemical, such as chlorine, potassium permanganate or hydrogen peroxide, is used to oxidize the ferrous iron instead of oxygen. Chlorine works best between pH 6.5 and 7.5. Excess chlorine can be removed by an activated carbon filter. Potassium permanganate works best at pH greater than 7.5, but this chemical is toxic, so careful calibration, monitoring and maintenance of the system is required.

Oxidizing filters (also known as catalyzing filters) are made of manganese greensand or zeolite coated with manganese oxide. These filters absorb iron and manganese from the water by converting them to an oxidized form and causing them to precipitate in the filter. These filters must be periodically backwashed to remove the deposited iron. A lot of our tank iron removal systems are made this way.

Phosphate treatment can be used to prevent ferrous iron from precipitating. In this treatment, ferrous iron ions react with the phosphate ion, preventing the iron from precipitating as solids. However, there are some limitations to this approach. This treatment does not remove the metallic taste from the water, and iron precipitation can still occur in heated water. Also, because of environmental concerns, the use of phosphate products may be banned in some areas.

Iron in Drinking Water How To Remove | FilterWater.com