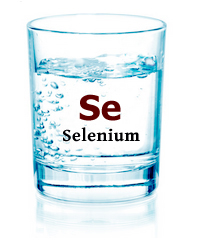 Selenium is a naturally-occurring element that is unevenly distributed in the earth’s crust. Selenium is usually found it its highest amounts in ore deposits containing other elements. In industry, it is most widely used in electronic and photocopier components, but also in other materials such as glass, rubber and metals. Release of selenium contamination to the environment is most often associated with copper smelting activities.

“Even though selenium is needed in small quantities, higher levels of selenium are toxic.”

Selenium is an essential mineral nutrient that humans need in trace quantities. Most of the selenium ingested by people is from food. Deficiency in this mineral can lead to artherosclerosis, and it may lead to an increase in susceptibility to chronic diseases.

Even though selenium is needed in small quantities, higher levels of it are toxic. Selenium is toxic at levels of 0.7 to 7 milligrams (mg) per day. Short-term effects include changes in hair and fingernails, nervous system damage, fatigue and irritability.

Long-term exposure to excessive selenium can lead to hair and fingernail loss, dermatitis, kidney and liver damage, and problems with the nervous and circulatory systems.

Interesting fact: Selenium dietary supplements can be harmful to people who already get enough selenium.

For drinking water, the U.S. Environmental Protection Agency (USEPA) has set a maximum contaminant level (MCL) and maximum contaminant level goal (MCLG) for selenium of 0.05 milligrams per liter (mg/L or parts per million) in municipal water supplies. The MCL is the maximum concentration of selenium that is legally allowed in public drinking water systems under the Safe Drinking Water Act. The MCLG is the level of selenium in drinking water at which no adverse health risks are likely to occur, with an adequate margin of safety. Fortunately, it is not common for selenium concentrations in potable water to be above the MCL of 0.05 milligrams per liter.

How to Remove Selenium from Drinking Water

“The effectiveness of some methods of removing selenium from water depends on its chemical form.”

Chemically, selenium occurs in water in two forms. Selenium (VI), the oxidized form of selenium, is the dominate form of selenium under oxidizing conditions, and selenium (IV) is dominant under reducing conditions. The effectiveness of some methods of removing selenium from water depends on its chemical form.

Selenium can be removed from drinking water by one of several different methods, including reverse osmosis, distillation, strong base anion exchange filtering, and activated alumina adsorption.

Strong base anion exchange filters work by removing selenate ions (a type of dissolved selenium (VI)) by adsorbing them onto anion-exchange resins. Because these resins preferentially adsorb selenate ions, they can remove selenium even when the resin becomes saturated with other ions such as sulfate. If selenium (IV) is present, it must be converted to selenium (VI) through oxidation by free chlorine (or oxygen at high pH). The removal of selenium takes place in filter cartridges that may be part of point-of-use systems (near the kitchen sink) or point-of-entry systems that treat all water entering the house.

The filters in filtration systems need to be replaced or regenerated periodically to maintain their effectiveness over time.

Selenium in Drinking Water How To Remove | FilterWater.com