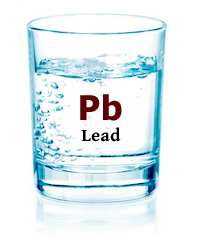 Most people are aware of the problem of “lead poisoning”, which refers to health conditions associated with buildup of lead in the body. The harmful qualities of lead, affecting both mind and body, have been known since ancient Rome. Children are especially vulnerable to lead poisoning, and the most common type of exposure to lead is through ingestion of lead-based paint in old houses and toys. Other common exposure pathways include eating after handling lead-contaminated materials, and drinking lead-contaminated water.

Lead poisoning can cause a number of different health problems. Some of the long-term symptoms include abdominal problems (including pain, cramps and constipation), joint and muscle pain, fatigue, loss of appetite, high blood pressure, anemia and kidney dysfunction, as well as headaches, memory loss, irritability and sleep problems. Lead poisoning can also cause developmental problems and intellectual disabilities in children, such as slowed growth, hearing problems, behavioral problems, low IQ, and learning difficulties.

“With an adequate margin of safety, the level of lead in drinking water at which no adverse health risks are likely to occur is zero.”

For drinking water, the U.S. Environmental Protection Agency (USEPA) has set an action level for lead of 15 micrograms per liter (µg/L or parts per billion) in municipal water supplies. If more than 10% of tap water samples have concentrations exceeding this level, then action must be taken to reduce lead levels and to educate and inform the public.

Lead has been widely-used in plumbing for thousands of years. As a material for making pipes, lead is easy to bend and is excellent at resisting leaks. Lead was the favorite material for water supply pipes in ancient Rome, and it is still used as the primary water supply piping material in many U.S. cities. Lead pipes can also be found in some older homes.

In lead water supply pipes, the lead is usually lined with a protective layer of metal oxides that prevents the water from coming into direct contact with the lead. However, extreme care must be taken on the part of municipal water suppliers to prevent corrosion of this protective layer. This involves monitoring the water chemistry and adjusting it if necessary (often with the addition of chemical additives) to prevent damage to the protective layer.

A failure to prevent corrosion of lead water supply pipes can lead to dangerously high levels of lead in drinking water. In 2014, the city of Flint Michigan changed its water supply to the more corrosive water from the Flint River without properly protecting its lead pipes from corrosion. The result was dangerous levels of lead contamination in the drinking water and widespread lead poisoning. Lead concentrations of 13,200 micrograms per liter (over 800 times the U.S. EPA action level) were detected in homes in the city in 2015. 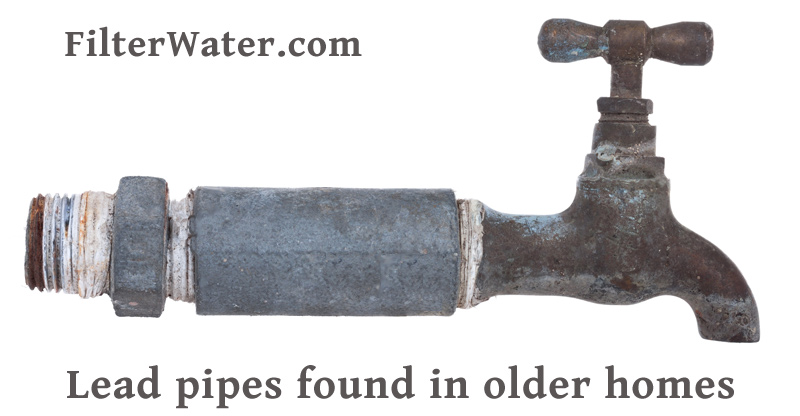 Household plumbing systems can also be an important source of lead to drinking water. Lead is commonly found in many homes as lead-based solder used to connect copper pipes, as well as in galvanized pipes and brass or chrome-plated fittings and faucets. Chemical corrosion of household pipes, as well as strong vibrations (such as when quickly shutting off or turning on faucets), can result in the release of significant amounts on lead in home plumbing systems. Water temperature and chemistry can affect the corrosion of metal pipes, as hot water is more corrosive than cold water, and soft water (water low is dissolved solids such as calcium and magnesium) is more corrosive than hard water. Acidic water (low pH) is also a source of corrosion, read more here about acidic water and how to solve it.

Interesting fact: The English word “plumbing” is derived from the Latin word for lead (plumbum).

“Household plumbing systems can also be an important source of lead to drinking water.”

Other Sources of Lead

Lead has many useful chemical properties that have made it attractive for use in many products, such as paint, glassware, ceramics, and metals, including food containers. It is common for soil to be contaminated with lead near where lead-containing products were used or manufactured. This soil-bound lead may leach into groundwater.

Lead was also widely used as an additive in gasoline in the U.S. until it was banned in 1996. Lead associated with emissions from automobiles still contaminates soil along road-sides and in urban areas. Many spills of leaded gasoline that occurred prior to 1996 still contribute to lead contamination of soil and groundwater.

Lead in water is colorless, odorless and tasteless, so detection requires chemical testing. In the home, water samples should include a “first-draw” sample of cold water that has sat in contact with the pipes overnight, as well as a running water sample. This allows the lead contribution of the household plumbing system to be determined. You can test for presence of lead with this lead test, or in a packaged kits designed for your city drinking water, well water, and a more comprehensive 15-contaminant test.

If the household plumbing system is contributing significant amounts of lead to your water, you can reduce your exposure to lead by flushing the plumbing system by running water in the faucet for one or two minutes (or less if there was recent heavy water usage such as showering or toilet flushing) before using it for drinking or cooking. Water that has sat in contact with the pipes for less than one hour does not need to be flushed.

A more effective but more expensive approach is to update the plumbing in the house to replace lead-soldered pipe and other lead-containing fittings. New regulations that took effect in 2014 specify that any surfaces coming into contact with drinking water should contain less than 0.25% lead. Alternatively, acid-neutralizing filters can be used to prevent corrosion of the household plumbing system. The method neutralizes the acidity of the water supply by adding lime, which raises pH and increases the hardness of the water, thus making the water less corrosive.

However, if the lead concentration in the running water sample is above the U.S. EPA action level of 15 micrograms per liter, action should be taken to remove lead from your water supply.

How to Remove Lead

Lead can be removed from drinking water by one of several different methods, including Reverse Osmosis (RO), distillation, ion exchange filtering, and granulated activated carbon filtering. We also have specialized, lead-removing water filters designed for various uses and water conditions. Reverse osmosis works by forcing the water through a membrane that allows water molecules to pass through but blocks larger ions, such as ones associated with iron and lead. In a home setting, reverse osmosis systems are usually small systems (called point-of-use systems) located near the kitchen sink.

Reverse Osmosis Systems are cost-effective, but they are somewhat slow and can only produce up to 50 to a 100 gallons of treated water each day. The taste of the water will also be affected by the removal of the minerals.

Distillation systems work by removing the dissolved solids from the water by distillation, and small versions are available that can be placed on a kitchen counter. However, these systems are limited to producing relatively small amounts of water per day. Also, because they use electricity to boil the water, their cost of use is higher than for reverse osmosis systems.

Ion exchange filters work by removing lead molecules by adsorbing them onto mineral particles or resins. This takes place in filter cartridges that may be part of point-of-use systems (near the kitchen sink) or point-of-entry systems that treat all water entering the house. These filters must be replaced on a regular basis, and their performance can be affected by the presence of other minerals in the water.

Granulated activated carbon (GAC) filters are the least expensive and are simple to use. They can take the form of point-of-use systems or pitchers filled with water manually. However, their effectiveness is sensitive to water pH, and they are most effective at near-neutral pH (pH near 7).

The filters in filtration systems need to be replaced periodically to maintain their effectiveness over time.

Lead in Drinking Water How To Remove | FilterWater.com