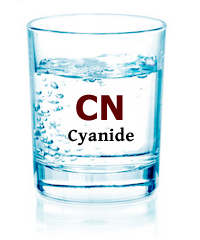 Cyanide is notorious in popular fiction as a deadly poison used for both homicide and suicide. This is based on a history of actual malicious use of its highly toxic properties, including the use of cyanide in chemical weapons in World War I. However, humans can tolerate low-levels of exposure to cyanide, and not all compounds containing cyanide are toxic.

“Cyanide compounds tend to migrate easily through soils under certain chemical conditions, and cyanide may leach into groundwater.”

Cyanide is a toxic ion that contains both carbon and nitrogen. It occurs naturally in many different plants and is contained in many types of food, including several vegetables commonly eaten in the U.S. It is often associated with industrial activity such as metal finishing, steel mills, and ore refining. Billions of tons of cyanide are produced each year through industrial processes. Cyanide has also been used in pesticides.

Cyanide compounds tend to migrate easily through soils under certain chemical conditions, and cyanide may leach into groundwater. Cyanide can contaminate groundwater from a number of different types of sources, such as industrial use of cyanides, cyanide wastes leaching from landfills, cyanide-containing pesticides, and even cyanide-containing road salts.

Cyanide is well-known as a poison, and a lethal does in humans is between 50 and 200 milligrams (mg). In smaller doses, short-term health problems can include neurological effects such as rapid breathing and tremors. Long-term exposure to cyanide can cause nerve damage, thyroid problems, and weight loss.

For drinking water, the U.S. Environmental Protection Agency (USEPA) has set a maximum contaminant level (MCL) and maximum contaminant level goal (MCLG) for cyanide of 0.2 milligrams per liter (mg/L or parts per million) in municipal water supplies. The MCLG is the level of cyanide in drinking water at which no adverse health risks are likely to occur, with an adequate margin of safety. Detection of cyanide in water requires chemical testing.

Interesting fact: Much of the cyanide that is produced is used for mining of gold and silver.

How to Remove Cyanide from Drinking Water

Cyanide can be removed from drinking water by reverse osmosis and ion exchange. Reverse osmosis works by forcing the water through a membrane that allows water molecules to pass through but blocks larger ions, such as ones associated with iron, lead and cyanide. Small reverse osmosis systems (called point-of-use systems) in homes are usually located near the kitchen sink.

Reverse osmosis systems are cost-effective, and originally were able to only produce a few gallons of treated water each day. Recent advancements in membrane elements allow newer systems to produce 100 gallons or even more per day. Keep in mind that the taste of the water can be affected by the removal of the minerals.

Ion exchange filters work by removing cyanide ions by adsorbing them onto special resins designed for removing cyanide. This removal takes place in filter cartridges that may be part of point-of-use systems (near the kitchen sink), or it can take place in point-of-entry systems that treat all water entering the house. The filters in filtration systems need to be replaced or regenerated periodically to maintain their effectiveness over time.

Cyanide In Well Water How To Remove | FilterWater.com