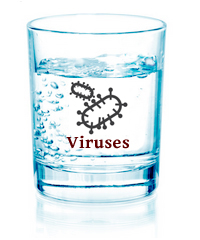 Water-borne diseases are a common problem throughout the world, especially where disinfection of drinking water is not used. Many people have heard of “traveler’s diarrhea,” where a traveler gets sick from drinking the local water. This is usually caused by a virus in the water. Viruses are very small parasites (ranging in size from 0.000010 to 0.000025 millimeters or between 0.1 and 0.004 micron) that can take over individual cells in their host and use them to reproduce themselves. Viruses are the cause of 50% of groundwater-related diseases worldwide. Even in the U.S., it is common for well water to be contaminated with viruses.

Contact with fecal matter from humans, livestock or wildlife can contribute viruses to water. This can come from sources such as leaky sewer lines or improperly functioning septic systems, or where manure or unsterilized sewage sludge is present in agricultural areas. Such areas can include feedlots or barnyards, manure storage areas, pastures or rangelands, and places where manure or sewage sludge is applied to the ground.

“Viruses are the cause of 50% of groundwater-related diseases worldwide.”

Municipal sewer systems are often bypassed during high-rainfall events when the flow of sewage is greater than the ability of treatment systems to handle it. This can result in raw sewage entering streams, which in turn can affect water supplies downstream.

Viruses can be killed or deactivated by chlorination or boiling of water. In most private well water systems and even some municipal water supplies, the water is not disinfected. Viruses can persist in non-disinfected water and infect humans.

Enteric viruses are a type of virus that infects the gastrointestinal tracts of humans and animals and are excreted in their feces. One common type of virus that infects humans through drinking water is rotaviruses. These viruses cause stomach flu (gastroenteritis), especially in children. In fact, rotaviruses are the main cause of stomach flu in children and “traveler’s diarrhea” in adults.

“Rotaviruses are the main cause of stomach flu in children and ‘traveler’s diarrhea’ in adults.”

Another common enteric virus that is spread through infected drinking water is Hepatitis A. During the most contagious stage of this illness, the victim usually shows no sign of infection, making it difficult to prevent spreading the germs. The virus is excreted from the infected person, then it is carried by water. Hepatitis A causes inflammation of the liver, low energy, weakness, nausea, fever or jaundice. Mild cases of Hepatitis A require rest for one or two weeks, and severe cases may cause liver damage or death.

Other common viruses that infect drinking water are noroviruses, which cause gastroenteritis, and enteroviruses, which cause polio and non-polio related diseases. Most people with polio either do not get sick or experience minor symptoms, but permanent damage to muscle function in the legs or arms occurs in rare cases (the U.S. has been polio-free since 1979, but it still exists in some other parts of the world). Non-polio enteroviruses are one of the largest sources of viral infections in humans. Most infections do not result in symptoms, but people that do become ill from these viruses usually develop cold or flu-like symptoms.

Interesting fact: There are about one million virus particles in one milliliter of seawater.

For drinking water, the U.S. Environmental Protection Agency (USEPA) has set a maximum contaminant level goal (MCLG) for viruses of zero virus particles per 100 milliliter sample of municipal water. The MCLG is the level at which no adverse health risks are likely to occur, with an adequate margin of safety, meaning that no virus particles should be present in the water.

How to Treat Drinking Water for Viruses

Problems with infected well water can often be fixed by taking measures to prevent surface water from contaminating the water supply, such as sealing a spring box or using a sanitary well cap. Properly maintaining a septic system or controlling sources of animal waste near a well or spring may also help with the problem.

Boiling water at a rolling boil for one minute will safely kill all viruses and other infectious organisms, but this is not a good long-term solution because it is energy and labor intensive and only produces a small amount of water.

If the source of infection to the water supply cannot be controlled, drinking water contaminated with viruses and infectious organisms can be treated continuously by ultraviolet (UV) light, ozonation, or chlorination.

Ultraviolet disinfection works by killing viruses and other infectious organisms by exposing them to ultraviolet (UV) light. In this type of system, UV light kills viruses and other organisms by irradiating the water as it flows over a glass sleeve that contains the light source. This method of disinfection consumes a small but significant amount of electricity. It is important that the water be very clear so that the UV light can reach the viruses, so anything that would make the water less than perfectly clear (such as sediment or organic matter) must be filtered out before the water enters the light chamber. Likewise, the glass sleeve enclosing the light source must also be kept clear of scale or other deposits that would block the light.

In contrast with UV, a chlorination system kills viruses and other microorganisms chemically. This type of system continuously adds chlorine (in liquid or solid form) to the water through a feed system. Because sediment in the water could interfere with disinfection, a filter should be placed before the chlorine injector. Chlorine is consumed as it kills viruses and other organisms in the water and also as it reacts with other impurities (such as iron or organic matter). To ensure adequate disinfection, enough chlorine needs to be added so that there is a small amount left over after it is consumed. However, this residual chlorine can affect the taste of the water, so it may be desirable to remove it before drinking.

Chlorination also requires a certain amount of contact time for it to kill microorganisms (usually 30 minutes). This is why water is often stored in a large holding tank or run through a series of coiled pipes after being chlorinated. Chlorine systems must be maintained to ensure that they function properly, and the chlorine supply must be replenished periodically.

Ozonation is similar to chlorination in that ozone is injected into the water and kills viruses and other organisms. Ozone is an oxidizing gas that is produced using electricity and then injected into the water. Ozonation systems are more costly than UV or chlorination systems, but they can treat water for multiple contaminants, such as viruses, bacteria, iron and manganese.

Viruses in Drinking Water How To Remove | FilterWater.com