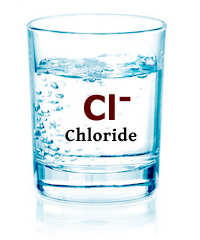 Chloride is an ion that is most commonly associated with salts such as sodium chloride (common table salt). Although they are made of the same element, chloride should not be confused with chlorine, which is added to water as a disinfectant. Unlike the chlorine added to drinking water, chloride is relatively non-reactive, so it doesn’t have the ability to disinfect water.

Chloride is present in all natural water, including rainwater. Concentrations of chloride are very high in seawater, which is known for its saltiness. In rocks, chloride can occur in salts such as sodium chloride and potassium chloride, which dissolve easily when they come into contact with water. Salt dissolved from rocks accumulates in oceans and lakes with closed basins, such as the Great Salt Lake in Utah, sometimes to extremely high concentrations.

“If a notable increase in chloride concentration is observed in well water, the water should be tested for coliform bacteria.”

Chloride is not generally considered to be harmful to human health. However, high chloride concentrations are often associated with high total dissolved solids (TDS). High levels of TDS can lead to corrosion of pipes and plumbing fixtures by preventing the formation of protective deposits on exposed metal surfaces. This corrosion may lead to unsafe levels of lead and copper in the water.

High chloride concentrations may also be associated with high sodium concentrations. Too much sodium intake can cause high blood pressure and can lead to damage to the heart and arteries. For people on a low-salt diet, concentrations of sodium in drinking water should be less than 20 milligrams per liter.

Because chloride in drinking water does not, by itself, pose a health risk to most people, no health-based guidelines for chloride in drinking water have been proposed by the U.S. Environmental Protection Agency (USEPA). Instead, the USEPA has set a secondary maximum contaminant level (SMCL) for chloride of 250 milligrams per liter (mg/L or parts per million), which is the concentration of chloride at which the taste of the water starts to become undesirable.

Interesting fact: Only a small proportion of the salt consumed in the U.S is used in food. The majority is used in road de-icing and chemical production.

How to Remove Chloride from Drinking Water

Distillation systems work by removing chloride and dissolved solids from the water by distillation, and small versions can be placed on a kitchen counter. However, these systems can only produce relatively small amounts of water per day, and they are more costly to use compared with reverse osmosis systems because they use electricity to boil the water.

Reverse Osmosis is the best process to remove salts such as chloride. RO process works by forcing the water through a membrane that blocks larger ions, such as chloride, but allows water molecules to pass through. In homes, small reverse osmosis systems called point-of-use systems are often located near the kitchen sink. Although reverse osmosis systems are cost-effective, older systems could produce only a small amount of treated water each day. Now, recent improvements in membrane elements allow for systems that produce 100 or more gallon per day.

DI, or Deionization Systems (Demineralization) work by removing chloride ions by adsorbing them onto anion-exchange resins. These systems adsorb sulfate, chloride and other anions from the water. Because these resins preferentially adsorb sulfate ions, their effectiveness at removing chloride will be negatively impacted if sulfate concentrations are high. Care must be taken to replace or regenerate a filter before it becomes saturated. Otherwise, sulfate ions will replace chloride ions already adsorbed to the filter, leading to an increase in the chloride concentration of the water instead of a decrease. The removal of chloride takes place in filter cartridges that may be part of point-of-use systems (near the kitchen sink) or point-of-entry systems that treat all water entering the house. However , this process is not stable and can produce water that is near distilled, and best to be used in commercial and industrial applications.

Chloride in Drinking Water How To Remove | FilterWater.com