The Harmful Effects of Chlorine in Water 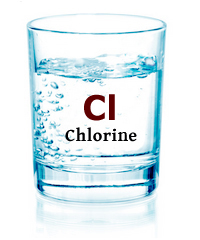 Chlorine is the #1 contaminant in drinking water. While the chemical is added as a means to purify water and kill off microorganisms and other waterborne pathogens, it has several harmful effects as well. Unfortunately, chlorine treatment does not guarantee the drinking water coming out of a faucet is free from unhealthy microorganisms.

Chlorine is a naturally occurring element with many uses, from purifying water to disinfecting and bleaching. In small quantities, exposure to this gas or liquid can be poisonous. As a gas, it has a pale green color with a smelly odor. Inhaling the gas can cause difficulty in breathing. Chlorine ion is abundant in nature and can be found in large amounts in salts.

Why Do We Use Chlorine For Treating Water?

The addition of chlorine in drinking water began in the 1800s and became the standard in water treatment in 1904. Unfortunately, we do not simply use chlorine because it is the safest and most effective means of disinfection, rather because it is the cheapest method. Drinking chlorine-contaminated water is no different than drinking a glass of water that contains bleach.

It is crucial you protect the health of your family and loved ones as chlorine-contaminated water can cause a number of health problems, including:

Over the years, researchers have found that people who are exposed to chlorinated water over long periods of time, have a greater risk of contracting bladder cancer. Several links have been found between chlorinated drinking water and colorectal cancer but we need more research to confirm such links. Studies have also indicated that by-products created in the process of chlorine disinfection also increase the risk of cancer. The following by-products play an integral role in causing cancer in laboratory animals:

Scientists claim that other chlorinated by-products also play a role in causing cancer. These chlorine by-products trigger the production of free radicals in the body, resulting in carcinogenic cell damage. While the concentration of these products is relatively low, scientists believe they are responsible for causing a majority of the cancers in the US.

Hazardous for Your Children’s Health

According to different studies, drinking and long-term exposure to chlorinated water can potentially increase the risks asthmatic attacks particularly in children who do not have improved airway systems. In other studies, rodents that were exposed to chloramines and chlorine developed tumors in their intestines and kidneys. If exposed to the skin, chlorine contaminated water can cause irritation and burn the skin as well.

Chlorine can be described as a pesticide whose sole purpose is to cause damage to living organisms. Drinking water contaminated with chlorine destroys cells and tissues inside our body. This explains the carcinogenic behavior of chlorine.

Increases the Risk of Asthma

Drinking chorine contaminated water and swimming in chlorinated pools increases the risk of respiratory problems, such as asthma, particularly in children. Unfortunately, in some cities in the US, the concentration of chlorine in tap water is just as high as in swimming pools. This can cause skin irritation in the airways of sensitive people who are already suffering from respiratory issues, especially babies and children. Showering and bathing in chlorinated water can also increase the risk of eczema in children. Showering with unfiltered water may also cause the following symptoms:

Apart from monitoring the chlorine content in pools, invest in carbon filters to make drinking water much safer for your children and family.

Chlorine added to your water supply can pose serious threats to your cardio-vascular health. Scientist, Dr. Joseph Price, conducted a test. He used two groups of chickens as his test subjects to find out the basic cause of atherosclerosis that eventually leads to strokes and heart attacks. One group of chickens was given chlorine-contaminated water to drink while the other went without.

Results confirmed all the chickens that drank the contaminated water showed some levels of heart and circulatory diseases. During winter, these chickens further displayed symptoms of poor health, such as poor circulation, reduced activity levels and shivering. The group that went without chlorine grew up much faster and displayed vigorous health.

Apart from its health risks, chlorine contaminated water is a primary cause of odor and bad taste in drinking water. The unpleasant taste may cause your children to opt for less healthful beverages to hydrate and refresh themselves, such as teas, soft drinks and other sweetened drinks that are detrimental for their health. In addition, the decreased intake of water is prone to affect their health negatively.

So, how do you protect your family from the dangerous effects of chlorine that is wreaking havoc on their health? Surely, you cannot just cut off your home’s water supply. The good news is that chlorine is one of the easiest contaminants to remove from water. We advise you take precautionary measures to protect your family:

Breathing in Chlorine Gas in the Shower

For Apartments and Smaller Homes:

For small apartments and townhouses, we recommend you invest in our Whole Houser Water Filter 20 and Triple 20. This ingenious water system will filter your water your water supply at a steady rate of 3-5 gallons per minute. The system is available at an affordable price of $249.

For larger townhouses and homes with over 4 people, we recommend you invest in The Eagle 1000 or Big Blue High Flow Whole House System that is able to filter 6-10 gallons per minute flow. An Eagle 2000A is a loaded Whole House system for larger homes and houses with 4 or more residents. Depending on the model you choose, the system can cost you between $700 and $1800.

Building a Smart Home? Don't forget to get great tasting water too!

Check out our range of affordable water filtration systems that are proven to remove contaminants such as chlorine.