Related TopicsImportant Topics
Everyone is aware about controversy surrounding water fluoridation in the United States. Fluoride is a generic term that describes a wide variety of substances containing element Fluorine. Slightly less toxic than arsenic, but more toxic than lead, fluoride is the most negatively charged and most chemically active of all elements on Earth. Which means that it loves to combine and recombine with other elements in its path, looking for stronger bond and creating even more toxic combinations.

Contrary to fluoridationists' assurances, fluoride is anything but benign, and that's why industry loves it. How do the industrial, agricultural, pharmaceutical, and military interests love fluoride? Let us count the ways. Used to etch glass, ceramics and computer chips; refine petroleum products, make ceramic materials more porous, inhibit fermentation in breweries and wineries, polish aluminum, refine metals, and separate uranium isotopes in the production of nuclear warheads, fluoride is also a key ingredient in the most widely used insecticides and pesticides (rat poison), and is used in most general anesthetics, in many nerve gases (Sarin) and in many psychotropic drugs (Prozac). But what sounds like a dream lover for industry, is a toxic nightmare for the rest of us, as industry continually searches for new places to dispose of its fluoride waste. 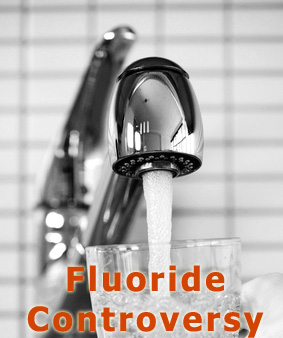 In the early 40th, funded by top fluoride-emitters such as the Aluminum Company of America (Alcoa), new research emerged which claimed to show fluoride's supposed benefits. Since many of the fluoride wastes were being produced: by the Manhattan Project - the U.S. Military's program to create the first atomic bomb - various federal agencies became full parties to this national effort to fool Americans into falling for fluoride. Since then, an industrial waste (which what fluoride is) is simply dumped into over 60% of nation’s water reservoirs.

Fluoride causes a wide variety of health problems, when exposed in moderate levels:
1) It is Neurotoxic, and lowers IQ
2) Brain problems similar to Alzheimer’s disease and dementia
3) Causes cancer – The Department of Health of NJ found that bone cancer in male children was between 2 and 7 times greater in areas where water was fluoridated
4) Changes bone structure and strength – fluoride gradually builds up in bones and causes adverse changes to the bone structure
5) Causes birth defects and Perinatal Deaths
6) Impairs immune system
7) Causes Acute Adverse Reactions
8) Causes initial stages of Skeletal Fluorosis and Ostioarthritis
9) A permanent damage to the teeth
10) Suppresses thyroid function

This list can be continued. A large doses of fluoride can cause breathing problems (if inhaled as gas) and death.

On top of that: