Related TopicsImportant Topics
Water pollution has many sources and characteristics. Humans and other organisms produce bodily wastes which enter rivers, lakes, oceans, and other surface waters; in high concentrations these wastes result in bacterial contamination and excessive nutrient loading. Industries discharge a variety of toxic compounds and heavy metals, and industrial process wastewater may also be too hot or too low in dissolved oxygen to support life. Silt-bearing runoff from construction sites and farms can inhibit the penetration of sunlight through the water column, and hampers water organisms in their search for food.

Ground water pollution is more difficult to clean up than surface pollution, because ground water can move hundreds of miles through unseen aquifers. Porous, fine grained aquifers, such as sands and sandstones naturally purify water of bacteria by simple filtration, but have no effect on chemical contaminants such as the components of gasoline. Ground water that moves through cracks and caverns is not filtered and can have organic pollution just as easily as surface water. In fact this can be aggravated by the human tendency to use sinkholes in Karst topography areas as dumps.

Causes of unhealthy and polluted water are pretty well outlined in this diagram: 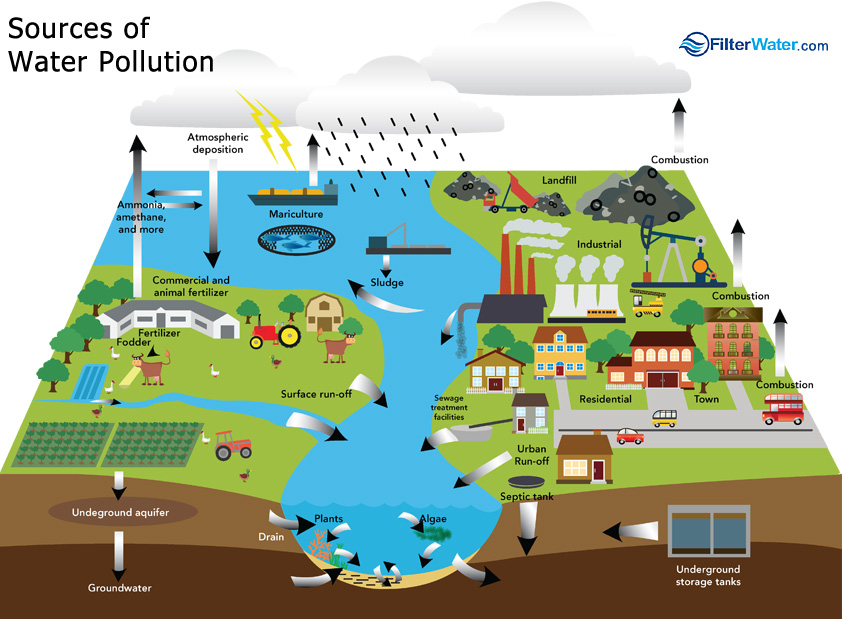 Acid rain is caused by compounds such as sulfur dioxide and nitrogen oxides that are released into the air. They can rise very high into the atmosphere and react with the environment to form more pollutants. These acidic pollutants fall out and produce an acid rain. Sulfur dioxide and nitrogen oxides dissolve easily in water and can be spread very far by the wind. These compounds become part of the rain and snow. Human activities, primarily manufacturing, are the main cause of acid rain. 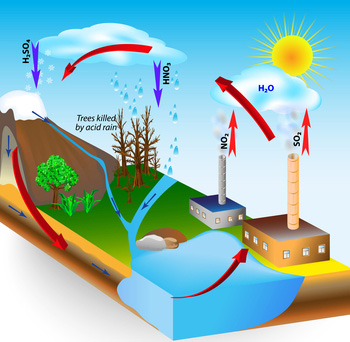 What Happens to Our Fresh Water?

Our fresh water is being depleted by these factors. Pollution also affects ground and well water, which you can read about in the next article, Well and Ground Water Contamination. You can also learn more about water contaminants, read about effects of water pollution and water purification technologies we use to remove these contaminants.
First published: 2006